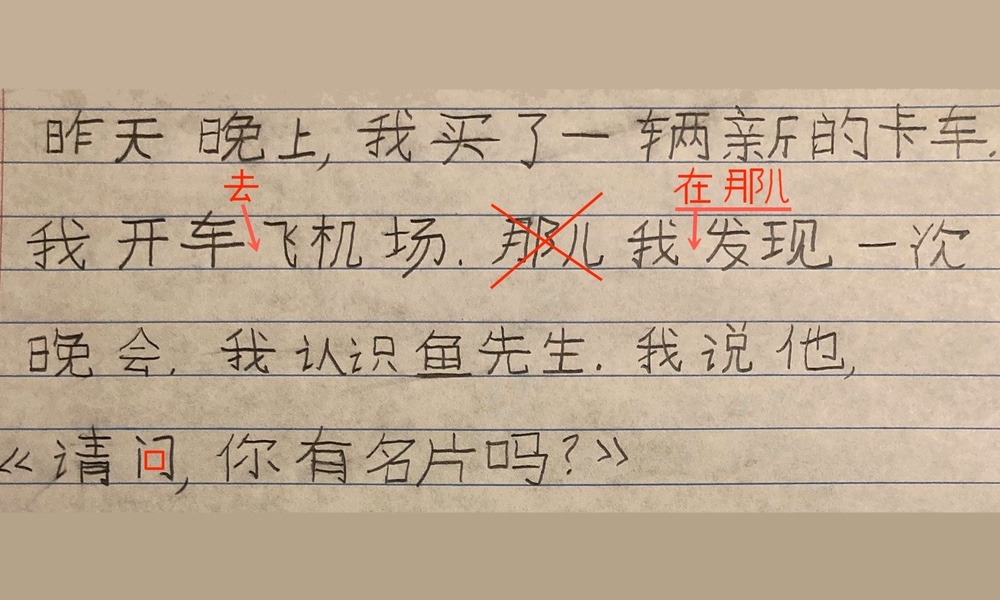 For The Chinese, Context Is Everything

It ain’t much, but it's the first story I've written in Chinese.

I'd wanted to write about Chinese political philosophy, but I found that my vocabulary was too limited to do it. Surprisingly, some Chinese ideas about governmental legitimacy are the same as those of our Western tradition, just dressed up in different language.

My story is kind of pointless, but it's what I could write at my current skill level:

“Yesterday evening, I bought a new truck. I drove it to the airport. There, I discovered a party. I met Mr. Fish. I said to him, ‘Excuse me, do you have a business card?’”

As television host Johnny Carson used to say when his audience didn’t laugh, “These are the jokes, folks. I get paid either way.”

"Yesterday evening, I buy (the verb is followed by a completed action marker) one unit new of truck. I drove to go ("go" was omitted, so it's in red) airplane field. I at that location (I had put "at that location" in the wrong place, so it's crossed out and re-inserted) discovered one unit of evening meeting (i.e., a party). I meet Fish Mister (the context indicates that I did it in the past). I say to him, "Please may I ask (I had omitted the little square in the middle of the character for "ask"), you have name card (yes/no question marker)?"

It wasn't until I studied Chinese that I realized how similar all Western languages are. English, French, Spanish, German, and even Russian and Hebrew all do the same things in basically the same ways. Not Chinese:

The bottom line is that if they work at it, most people can learn to read and understand some Chinese. But to speak or write it correctly takes much more knowledge. I'm slowly getting there.

If I were to draw one lesson from studying the Chinese language, it's that for the Chinese, context is everything. Nothing is seen in isolation. Even the word for "nothing" can mean half a dozen other things, depending on the context.

Whether as our ally or adversary (probably a little of both), China is going to be a player on the world stage. The more we know about it, the better we can play.