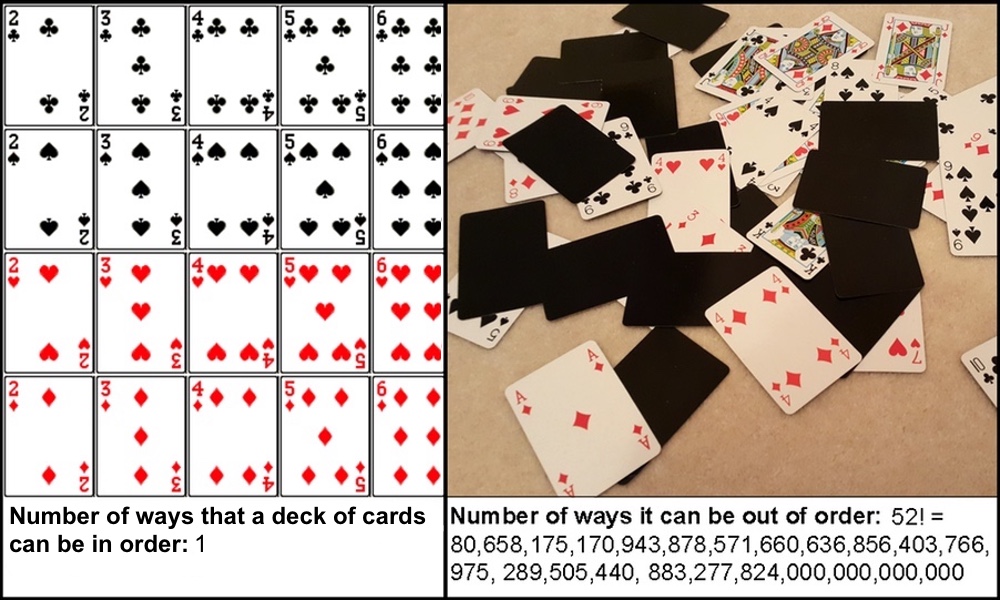 Many people say that "the arc of history bends toward justice."

Pardon my French, but ce n'est pas vrai. It's not true. In fact, it's the opposite of the truth.

If there is going to be justice in our world, we have to make it happen -- and we also have to get lucky. Very lucky.

Sure, everyone wants to believe that justice will prevail. And once in a while, it does.

Consider a deck of 52 playing cards.

If you throw the cards onto the floor, there is only one way for them to fall so that they're in order by suit and number. However, there are 52! (52 factorial) ways for them to fall out of order. How big a number is that? It's this:

So if you had to make a $10 bet on how the cards would fall, which way would you bet? Unless you wanted to lose your money, you'd bet on the cards falling out of order. That's as close to a "sure bet" as you're ever likely to see.

You could improve the odds a little -- but not much -- if you knew a trick to increase the probability of the cards falling in order. Then you would be applying intelligence and knowledge to reduce the chance of a chaotic result.

But your trick itself would face the same problem: there are more ways for it to go wrong than to go right:

then maybe you'd have a chance. It could happen.

Most likely, however, you'd still end up with the cards out of order. Your best hope would be for them to be a little less disordered than they would be if you hadn't used your trick.

If you take countries as analogous to decks of playing cards, then you might say that:

In the real world, every country will have flaws. That's inevitable. But if its people are lucky, it might be less disordered -- and more just -- than most other countries.

People who want to tear down America and replace it with an imagined utopia need to ask themselves a question: "Do I feel lucky?"